The Periodic Table Of Death

Humankind has now discovered a total of 118 elements. That’s amazing, right?! The only trouble with that is that some of them may or have already committed murder. Throughout history, humans have quite the track record of discovering elements, not fully understanding them, and in turn using them to poison the masses. We know of hundreds or possibly thousands of people that died at the hand of these seemingly harmless substances.

Arsenic (As) has put a lot of hurt on a lot of people. Today, one might contract arsenic poisoning through drinking water, some Chinese herbal medicines, wood preservatives, among other things. However, around the 19th century, it was a common threat. Most of you have heard of Sheele’s green. It is a cupric hydrogen arsenate with yellow-green pigment, and was created by Carl Williams Sheele in 1775. In the 19th century, Sheele’s green became all the rage. You could find it in wallpaper, hanging papers,candles, paints, some children’s toys, and even dye in cotton and linens. The worst, though, was the wallpaper. The French loved this look: 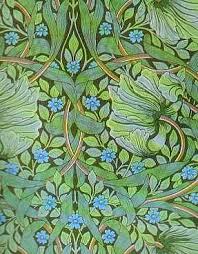 I’ll admit. It’s very pretty. I choose life, though. It’s hard for us to imagine now that someone would use poison-laced paper to line the interior of their home.However, then it was a sought-after look.The deaths by walls were caused by the dust particles from the pigments in the paper that flaked and created a toxic gas product. I say toxic because it killed several hundred people within the span of a  year. It has also been speculated that Napoleon’s favorite green room played a part in his death.

The first recording of any issues was in 1862. Three children died from symptoms similar to diphtheria (a bacterial disease which causes the inflammation of mucous membranes and hinders breathing and swallowing).In the 1890s, science finally proved that arsenic was deadly, The symptoms shown of arsenic poisoning include: headaches, chest complaints, nausea, and fatigue. Unfortunately, people who displayed these symptoms were often told to go in their rooms, which was basically like asking them to step into a green-hued gas chamber.

Naturally, as people found out the dangers of the wallpaper, they would rip it from the walls. This made it worse. The fumes were also released through moisture.

If that’s not enough, doctors prescribed arsenic-laced medications for all types of maladies, including morning sickness, worms, asthma, and rheumatism. There were tanjore pills which were basically black pepper and arsenic and were popular for British soldiers as an anti-venom. It was thought to cure the bite of a tsetse fly. Darwin used As to treat eczema, and had ill-health for the majority of his life. Asthma patients were often told to put arsenic in pipes with tobacco. Put that in your pipe and smoke it!

Next on the list is Radium (Ra). Marie Curie discovered Radium in 1898, and later won the Nobel Prize for doing such. It was then made extremely popular during The Bell Epoque, France’s golden era at the turn of the last century. The French began using the luminous element for almost any and everything. It was used in alarm clock dials, chapstick, water fountains, body lotions, cough syrups, toothpaste, topical ointments, and face creams. Marie herself kept radioactive salts by her beside, and her husband Pierre carried it around in his jacket pocket. It has been used to cure hair loss, impotence, arthritis, and high blood pressure. Once discovered that it had miraculous cancer cell killing properties, the French decided to put it in everything. Ladies began to want a glowing complexion, so they used RA in their make-up. Imagine this glowing face following you down a dark alley. Men, do you stop or keep going?

Mercury (Hg) tells an interesting story. No, really, Lewis Carroll made a pretty big name of himself telling of the Mad Hatter. By now, most of us have heard the reason the hatters had all gone mad. It was Mercury poisoning.

In 19th century England, Mercurial diseases were common amongst hatters. the symptoms included tremors, irritability, and mental instability. Mercury had effects on the skin, eyes, kidneys, respiratory system (if inhaled), and the nervous system. It caused memory loss, speech problems, and ataxia ( the loss of full control of bodily movements). Hatters used the element to remove fur. Prior to this discovery, camel urine was used (which didn’t cause insanity unless you had an aversion to dealing with an animal’s urine). The use of Mercury in the felt industry was banned in the US in 1941. The beginning of usage dates back to 17th century France. The term “mad as a hatter” was coined 30 years before Carroll ever used it. The first description of symptoms was in Russia in 1829. I think they should have stuck with camel urine.

Lead (Pb) is mostly known for being found in paint. It has always been cheap and durable and therefore was revered by the likes of Rembrandt for creating beautiful contrasts in oil paintings. Today, we know it as “flake white”. It’s been known by glassmakers to yield glassware that would refract light across a wider arc. One reason lead has been so commonly used is that it is simple to produce. It’s often mixed with more valuable minerals, such as silver. Once the ore is out, the lead can easily be separated out in an open fire, thanks to its low melting point. From this comes the most interesting of all lead poisoning history: the Roman emperors who drank themselves to insanity. This element was used in most pots and pans because it would not taint the batch being brewed in the way that copper did. Therefore, defrutum (an artificial sweetener used in most wines and alcoholic beverages in ancient Rome) was made in these pots. The effects would have been weight loss, anemia, irritability, and delirium. Some say it is the cause of some of the most famous and cruel emperors’ madnesses, such as Caesar, Caligula, and Nero.

No, that’s Lead Belly, you idiot. Did he have a lead belly? Was he drinking defrutum? Hmm.

That just about sums up my knowledge of elements that have already done harm and been found out. There are some others worth mentioning:

As you can see, knowing what chemicals and elements you’re putting your hand or your face in can come in quite handy (pun intended) if you enjoy staying alive. If not, I hear Mercury makes for a nice hand lotion!

I have no special talent. I am only passionately curious. -Albert Einstein This blog is for any and everyone to discuss all things imaginable. I am a huge supporter of human and animal rights. I also have many interests, most of which revolve around theoretical science and what most would call "impossible." This is my first blog, and I'm not quite sure which direction it's headed yet, but I think I'll end up where I need to be.